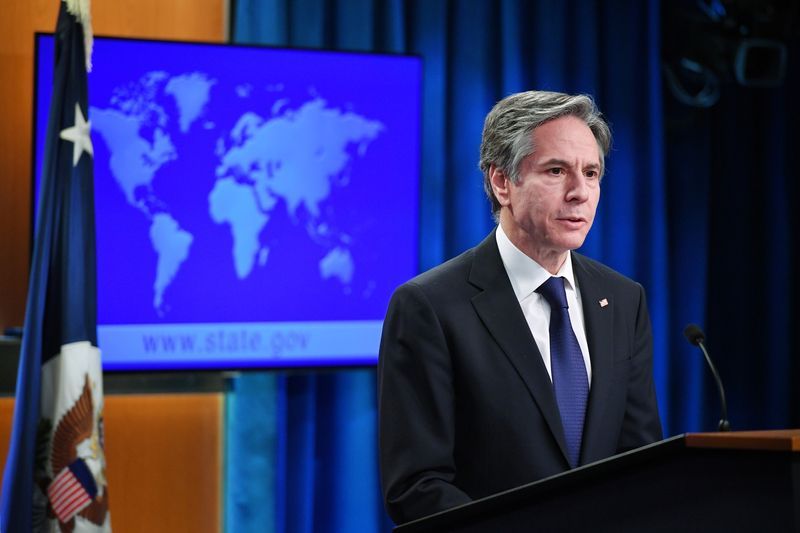 WASHINGTON (Reuters) – U.S. Secretary of State Antony Blinken on Tuesday called on international companies to consider cutting ties to enterprises that support Myanmar’s military and he decried its crackdown on anti-coup protesters.

At least 512 civilians had been killed in nearly two months of protests against the coup, 141 of them on Saturday, the bloodiest day of the unrest, according to the Assistance Association for Political Prisoners advocacy group.

Blinken told reporters the violence was “reprehensible” and followed a pattern of “increasingly disturbing and even horrifying violence” against demonstrators opposing military rule, including the killing of children as young as five.

The United States has condemned the Feb. 1 coup that ousted an elected government. Washington has imposed several rounds of sanctions, but Myanmar’s generals have refused to change course.

Blinken said other nations and companies worldwide should look at pulling “significant investments in enterprises that support the Burmese military.”

“They should be looking at those investments and reconsidering them as a means of denying the military the financial support it needs to sustain itself against the will of the people,” he said.

The United States last week placed Treasury sanctions on two military-owned conglomerates, which prevents U.S. companies and individuals from dealing with them.

But some companies, including firms from U.S. regional allies such as Japan and South Korea, still have business relationships with military-owned companies, according to activist groups.

Activists have also called on international energy companies like U.S.-based Chevron to withhold revenues from natural gas projects they operate in Myanmar from the junta-controlled government.

One of Myanmar’s main ethnic minority rebel groups warned of a growing threat of major conflict https://www.reuters.com/article/us-myanmar-politics/myanmar-insurgents-warn-of-growing-conflict-as-neighbours-press-junta-idUSKBN2BM07K on Tuesday and called for international intervention against the military crackdown.