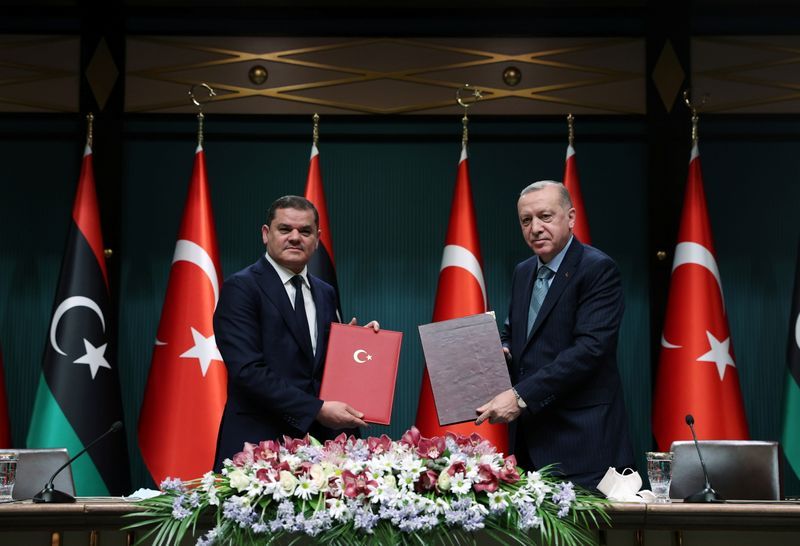 ANKARA (Reuters) – Turkish President Tayyip Erdogan said on Monday that Turkey and Libya were committed to a 2019 maritime demarcation accord in the eastern Mediterranean, after meeting Libya’s Prime Minister Abdulhamid Dbeibeh in Ankara.

“The maritime accord signed between Turkey and Libya secures national interests and future of both countries…We confirmed our determination on this issue today,” Erdogan said in a news conference.

Libya’s new unity government was sworn in on March 15 from two warring administrations that had ruled eastern and western regions, completing a smooth transition of power after a decade of violent chaos.

Turkey had backed the Tripoli-based Government of National Accord (GNA) against the eastern-based Libyan National Army (LNA), which was supported by Russia, Egypt, the United Arab Emirates and France.

Greece, which opposes the maritime agreement between Tripoli and Ankara, called for the accord to be cancelled, as it reopened its embassy in Libya after seven years.

Libyan Prime Minister Dbeibeh said agreements between the two countries, including the maritime demarcation agreement, are based on a valid framework.

The set of meetings with the Libyan delegation also included discussions over concrete steps to improve investments, bilateral trade and economic relations Erdogan also said adding that Ankara will send 150,000 doses of COVID-19 vaccines to Libya as part of a support against the outbreak.