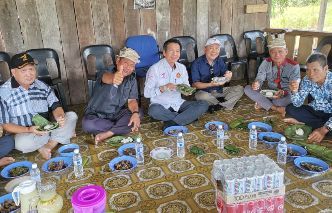 Ngau, who is Telang Usan state assemblyman, said longhouse folks are wary of outsiders who can stir disharmony even though by tradition they welcome all visitors.

“Longhouse folk by tradition, welcome all visitors who are peace-loving and who go there to visit with good intentions.

“However, they will not welcome those who can stir up trouble.

“Rural longhouses are located far away from the towns so these rural folks need to exercise caution.

“We in Baram PBB did not issue any directives to any longhouses to reject any Opposition parties.

“We in PBB will not stop any political opponents from operating but the longhouse folk will decide who they will welcome,” Ngau said on Friday (Sept 25).

He was responding to a press statement from Baram PKR chief Roland Engan who said that PKR members trying to enter several longhouses in Baram were denied entry.

Engan had said in a press statement to Miri reporters that certain quarters had directed these longhouse chiefs not to allow PKR or Pakatan Harapan parties from entering.

Ngau said Baram PBB did not give any orders to anyone to prevent PKR or Pakatan from operating in any rural longhouses.

“All political parties are welcomed to carry out their activities as long as the peace in the community is not disrupted.

“However, it is a big no for troublemakers,” he said.

The political temperature in Sarawak is heating up as the 12th state election looms.

The dissolution of the current state assembly is expected to be in the second half of November even though the deadline is June next year.

Ngau is the two-term assemblyman in Telang Usan.

PBB is part of the ruling Gabungan Parti Sarawak coalition which controls 68 out of the 82 state constituencies.