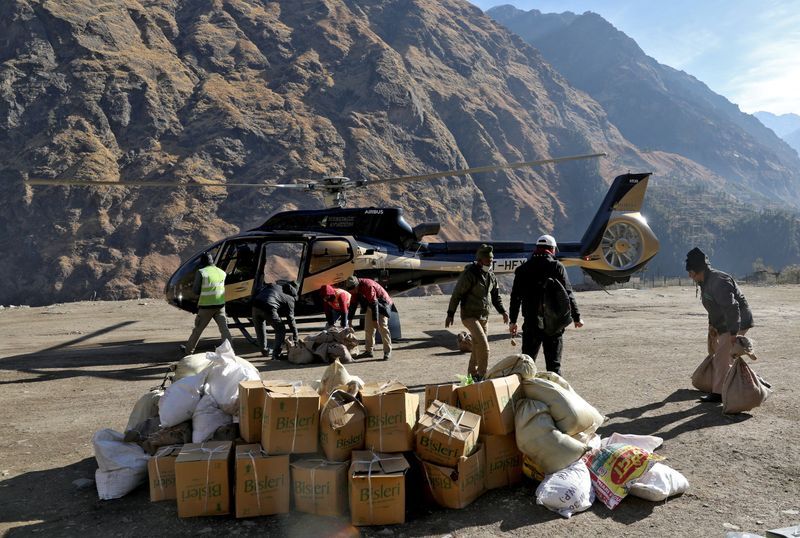 RAINI CHAK LATA, India (Reuters) – For three days, Sushma Rana waited at a makeshift dirt helipad in the Indian Himalayas to return to her village and look for her missing brother-in-law.

Yashpal Rana was herding goats when a flash flood swept down a remote valley on Sunday, smashing everything in its path including two hydroelectric power stations.

More than 200 people are feared killed, although most of those are still missing.

The wall of water also swept several bridges into the valley, home to more than a thousand people spread over 13 villages.

An eight-seater Airbus helicopter more often used to carry tourists has begun ferrying supplies to the villages, some of which are suffering from intermittent power and water.

But it is also carrying people back to their home villages to mourn.

Yashpal married his wife a year ago, and is the father of a four-month-old son.

His family has given up hope of finding him alive.

“We just want to find his body and perform his last rites,” Sushma said.

The valley is home to a key paramilitary post by the Chinese border, and many of the troops, known as the Indo-Tibetan Border Police (ITBP), are helping in the relief work from a command post at a primary school in Lata, one of the affected villages.

Some can now only be accessed via a 5km trek on foot, Deputy Commandant Raj, the officer in charge of the operation said. Dozens of solar powered lamps are being sent up towards the border to those without power.

The Indian military’s Mi-17 and Chinook helicopters are useless when trying to access the villages, perched on steep hills with little flat ground.

Instead, the relief operation is relying on a commercial craft – normally used for pleasure rides at a nearby ski resort – to land on a narrow strip of concrete perched by the Dauliganga river.

Jagged, snow-capped peaks loom over the valley, which is covered in forests of pine and fir.

In contrast to the mud and tangled metal remnants downstream, the crystalline Dauliganga – a tributary of the Ganges river worshipped as a god by many Indians – sparkles in the sun.

Reuters travelled on one of the relief missions into the valley, with returning locals in the passenger seats and sacks of rice and lentils in the helicopter’s small hold.

But in Raini Chak Lata, the first village in the valley to be cut off, the most pressing issue is not food, but processing the events of Sunday’s disaster, the causes of which are still be to be conclusively determined.

“Nobody wants to eat when family members are not able to come,” Yashpal’s brother Rajpal said.

Yashpal had two postgraduate business degrees, according to Rajpal, but was not able to find a job. He had returned to Raini Chak Lata, and was down at the river bank with the family’s goats when the torrent of water, mud and dust came roaring down the valley.

“He is probably somewhere there,” he said.

When Sushma saw the first helicopter of the day on Friday, she wept and ran towards it, before being held back by workers as the blades swept up a cloud of dust.

Authorities have transported more than 300 people since the disaster, but the list of people wanting to ride is long.

Finally, she was able to board the final flight of the day, which swept over destroyed dams.

She clutched her shawl as she disembarked.

“Somehow, after waiting for three days, I have finally arrived,” she said, walking the mile to the village on foot.