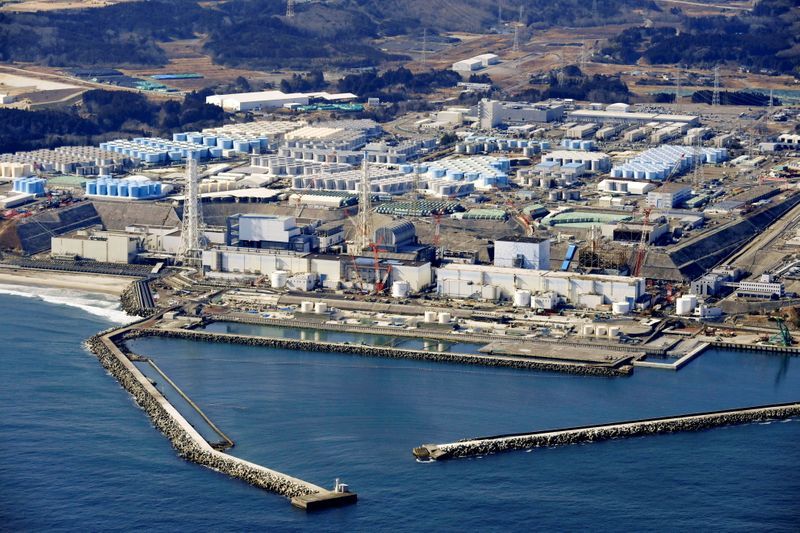 TOKYO (Reuters) – Japan plans to release into the sea more than a million tonnes of radioactive water from the destroyed Fukushima nuclear station, it said on Tuesday. Plant operator Tokyo Electric Power Company Holdings Inc (Tepco) will begun pumping out water in about two years after treatment in a process that will take decades to complete.

Tepco has been struggling with the build-up of contaminated water since bringing three reactors under control after a 2011 earthquake and tsunami knocked out electricity and cooling.

The company has been using a makeshift system of pumps and piping to inject water into damaged reactor vessels to keep melted uranium fuel rods cool.

The water is contaminated as it comes in contact with the fuel before leaking into damaged basements and tunnels, where it mixes with groundwater that flows through the site from hills above. The combination results in excess contaminated water that is pumped out and treated before being stored in huge tanks crowding the site.

Those tanks now hold about 1.3 million tonnes of radioactive water, enough for about 500 Olympic-sized swimming pools.

Efforts to tackle the problem have included building an “ice wall” around the damaged reactors and wells to draw groundwater away before it reaches the reactors. These measures have slowed, but not halted, the buildup of contaminated water.

In 2018, Tepco admitted it had not filtered all dangerous materials out of the water, despite saying for years they had been removed.

Tepco plans to filter the contaminated water again to remove isotopes, leaving only tritium, a radioactive isotope of hydrogen hard to separate from water. Tepco will then dilute the water until tritium levels fall below regulatory limits, before pumping it directly into the ocean from the coastal site.

Water containing tritium is routinely released from nuclear plants around the world and releasing the Fukushima water to the ocean is supported by regulatory authorities.

Tritium is considered to be relatively harmless because it does not emit enough energy to penetrate human skin. But when ingested it can raise cancer risks, a Scientific American article said in 2014.

The first water release is not expected for about two years, time Tepco will use to begin filtering the water, building infrastructure and acquiring regulatory approval.

Until then, the buildup of contaminated water will continue, with annual costs of water storage estimated at about 100 billion yen ($912.66 million).

Once begun, the water disposal will take decades to complete, with a rolling filtering and dilution process, alongside the planned decommissioning of the plant.

Tepco is engaging with fishing communities and other stakeholders and is promoting agriculture, fishery and forest products in stores and restaurants to reduce any reputational harm to produce from the area.

However, environmental groups, including Greenpeace, say the government should build more tanks to hold the water outside the plant instead of choosing the cheaper option of ocean release. Many people have questioned Tepco’s plans because there is a high level of distrust of the company.

Fishing unions in Fukushima urged the government for years not to release the water, arguing it would undo work to restore the damaged reputation of their fisheries.

Last October, the head of Japan’s fisheries unions said releasing the water would have a “catastrophic impact” on the industry.

Neighbouring countries have also expressed concern. On, a foreign ministry spokesman in South Korea, which maintains restrictions on Japanese produce, said it “expresses serious concerns that the decision could bring a direct and indirect impact on the safety of our people and surrounding environment.”

Municipal councils in Busan and Ulsan, South Korean cities close to the sea, have called for the release plan to be scrapped.

In China, a foreign ministry spokesman in October urged Japan to act with a “high sense of responsibility towards its own people, neighbouring countries and the international community”.

To view a graphic of the methods to contain water leaks at the Fukushima site, please click on: http://reut.rs/1QGhFIl