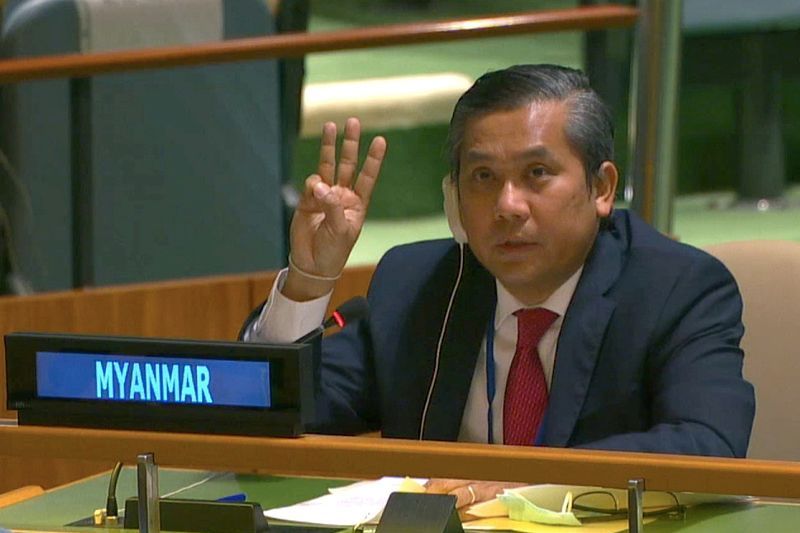 NEW YORK (Reuters) – Myanmar’s ambassador to the United Nations in New York formally staked his claim as the country’s legitimate representative in letters – seen by Reuters on Tuesday – to the U.N. General Assembly president and U.S. Secretary of State Antony Blinken.

Myanmar state television announced on Saturday that Kyaw Moe Tun had been fired for betraying the country, a day after he urged countries to use “any means necessary” to reverse a Feb. 1 coup that ousted the nation’s elected leader Aung San Suu Kyi.

“The perpetrators of the unlawful coup against the democratic government of Myanmar have no authority to countermand the legitimate authority of the president of my country,” Kyaw Moe Tun wrote on Monday to Blinken and Volkan Bozkir, president of the 193-member U.N. General Assembly.

“I wish therefore to confirm to you that I remain Myanmar’s permanent representative to the United Nations,” he said, adding that President Win Myint and Foreign Minister Aung San Suu Kyi appointed him last year and they remain lawfully elected to their roles.

Reuters was unable to reach the military authorities for comment.

The United Nations does not officially recognize the junta as Myanmar’s new government as it has received no official notification of any change in government or U.N. representation.

“We have not received any communication concerning changes in the representation of Myanmar here at the U.N. in New York,” U.N. spokesman Stephane Dujarric said on Monday. “And nor have our colleagues in protocol received any information from the Permanent Mission in Myanmar on any changes in the government.”

U.N. Secretary-General Antonio Guterres has pledged to mobilize global pressure “to make sure that this coup fails.”

As the United States hosts United Nations headquarters in New York City, Kyaw Moe Tun also asked Blinken to “continue to support my work with the immunities customary to this role.”

“We have not seen any official evidence or request that he be removed and for the time being he is the representative of the Myanmar government,” U.S. Ambassador to the United Nations, Linda Thomas-Greenfield, told reporters on Monday.

If the Myanmar junta, led by General Min Aung Hlaing, tries to seek international recognition by installing a new U.N. envoy it could set off a fight at the world body that could culminate with a vote at the General Assembly.

The United Nations has previously had to address competing claims for representation at the world body.

In September 2011, the General Assembly approved a Libyan request to accredit envoys of the country’s interim government. The move came after the United States, Russia, China and European nations had all recognized the new authorities.

Elected lawmakers ousted in the Myanmar coup have formed a committee and Kyaw Moe Tun told the U.N. General Assembly on Friday that is the “legitimate and duly elected government of Myanmar and must be recognized by the international community as such.”

Thomas-Greenfield said on Monday she hopes to use Washington’s presidency of the U.N. Security Council in March to push for more “intense discussions” on Myanmar. The Security Council has voiced concern over the state of emergency, but stopped short of condemning the coup due to opposition by Russia and China.