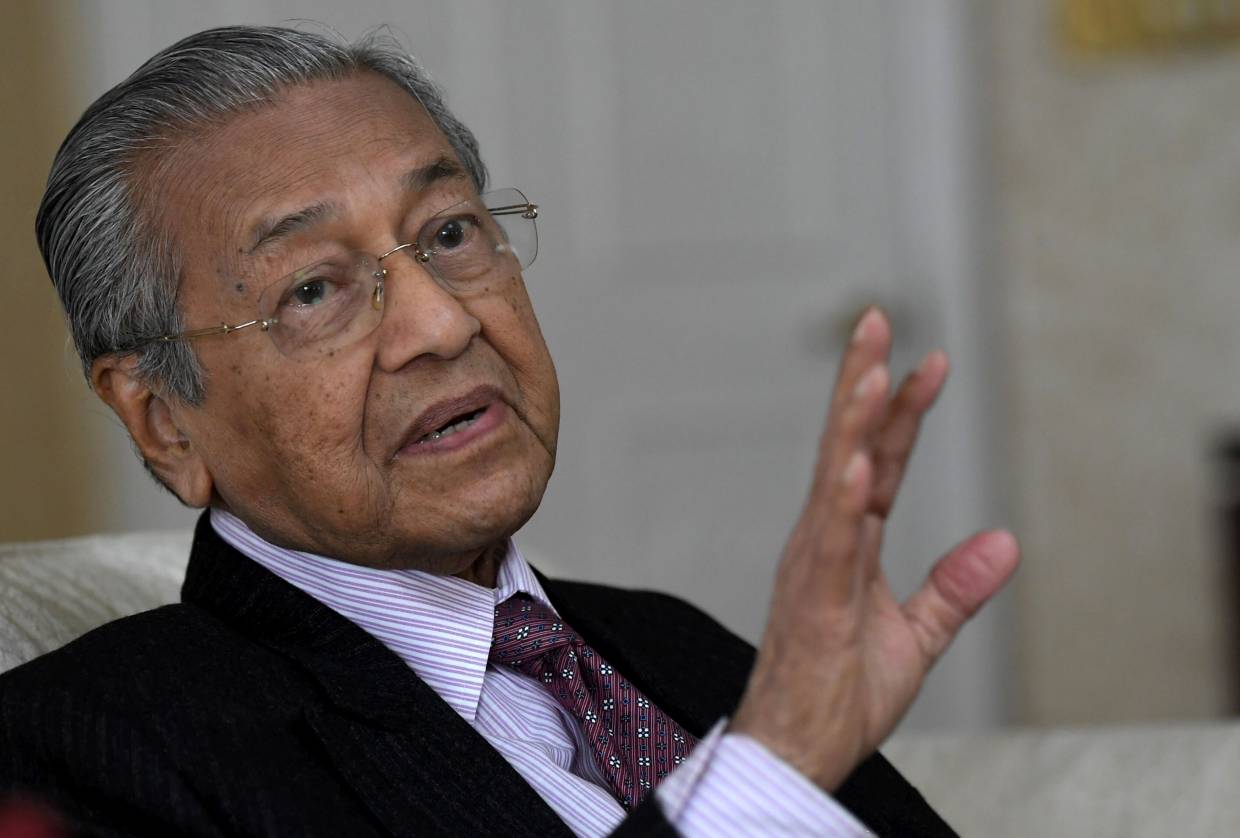 PETALING JAYA: Tun Dr Mahathir Mohamad (pic) says his resignation as prime minister on Feb 24, had nothing to do with Pakatan Harapan wanting Datuk Seri Anwar Ibrahim to take over, but was because he had lost the trust of his party.

The former premier also said that after his resignation, he and Anwar both could not garner enough of a majority to be the prime minister.

Dr Mahathir said, in a blog post on Saturday (Nov 21), that when Parti Pribumi Bersatu Malaysia (Bersatu) went against him on Feb 23 and left the Pakatan Harapan coalition, the government had fallen automatically.

“On Feb 23, I told Bersatu president Tan Sri Muhyiddin Yassin that his idea of Bersatu leaving Pakatan must be postponed as Pakatan was still supporting me.

“When the Bersatu supreme council met after my meeting with Muhyiddin and his friends, I begged that they postpone leaving Pakatan. I suggested that we wait and see Pakatan’s reaction.

“The supreme council rejected my suggestion and agreed that Bersatu would leave Pakatan immediately.

“To me, this was the final decision. This meant the trust in me as the chairman was no more. This also meant that Bersatu had left Pakatan and the government had fallen.

“This loss of trust in me meant I could not remain as the chairman of Bersatu any longer. If I was no longer Bersatu chairman and Pakatan was not the government, I would also not be prime minister anymore.

“That night, Muhyiddin joined PAS and Umno leaders at the Sheraton Hotel in Petaling Jaya. His presence with the enemies of Pakatan showed that the formation of the Perikatan Nasional government was already a reality.

“Although there were rumours that I would be accepted by Muafakat Nasional parties (Umno and PAS) and Bersatu as the prime minister, I could not accept the Umno criminals as part of the government I would lead,” said Dr Mahathir.

He said when a poll was done, he only managed to garner the support of 66 MPs.

“They gave a vote of 92 MPs to Anwar. I lost and Anwar lost as well, for the one who can be the PM is the one who has the majority of MPs’ support in the Dewan Rakyat.

“If all the three Pakatan parties (PKR, DAP and Amanah) had supported me, I would have gotten 158 plus the 66 who supported me.

“If I had gotten the 92 (who supported Anwar then), the Pakatan Harapan government could have retained me as the prime minister and Anwar’s plan of succeeding me could have happened,” Dr Mahathir said.

He further explained that when Anwar also failed to garner a majority, Pakatan decided to support him.

“Anwar agreed, on the condition he was made the deputy prime minister.

“I did not agree as I wanted to keep the previous Cabinet.

“Anwar agreed to this and we managed to garner a majority of 114 in my favour.

“Unfortunately, Muhyiddin had already gained the King’s consent to be appointed as the prime minister.

“The effort to topple Perikatan was continued by Pakatan and I agreed to be part of it, but Anwar did not want my participation,” Dr Mahathir said.

He said that led to a falling out which meant neither he nor Anwar had a majority.

Dr Mahathir said a vote in Dewan Rakyat may have proven who had the most votes.

“My group of MPs and I were rejected by Anwar when he claimed he had formidable support to be the prime minister.

“We all know that Anwar still could not become the prime minister. His claims of formidable support were found to be untrue.

“Even when he pushed me aside, he could not be the prime minister. In 2008, he failed as well. Is it really me stopping Anwar from being prime minister?” Dr Mahathir asked.