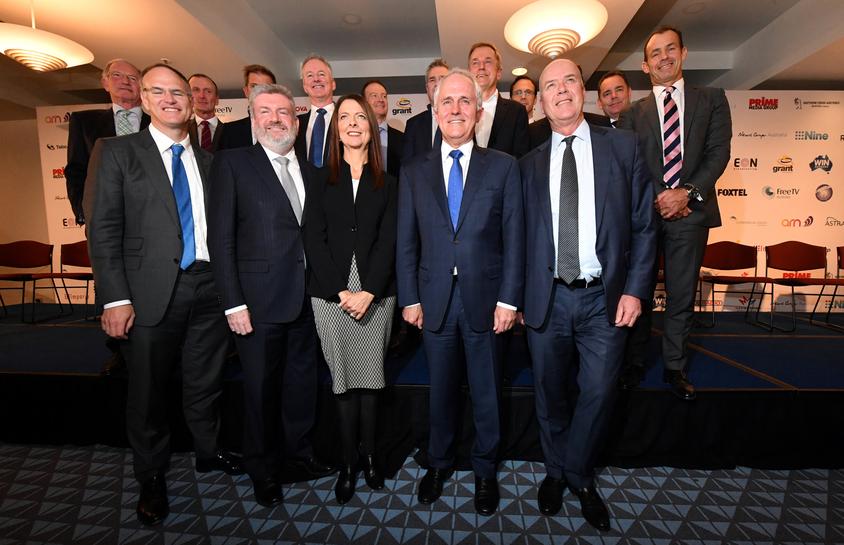 SYDNEY Bosses of Australia’s media companies, including an arm of Rupert Murdoch’s News Corp, have formed an unprecedented front to lobby for changes they say will allow more consolidation and help them compete with internet giants.

This week, in a show of unity, chief executives of companies from radio broadcasters to newspaper publishers joined Prime Minister Malcolm Turnbull in Canberra, in a last-ditch effort to swing the upper house, controlled by recalcitrant independent lawmakers.

Like rivals globally, Australia’s media companies have been squeezed by new arrivals and digital advertising.

But they have also been unable to join forces or expand into markets that are off limits because of restrictions on what assets they can own, as they battle online giants like Netflix and Google.

Australia’s “two out of three” rule, which has restricted deals, does not allow one organization to own all three media in any given city – newspapers, television and radio.

“The whole competitive landscape in which we operate has changed,” said Hugh Marks, chief executive officer of Nine Entertainment.

“Everyone’s kind of had to accept, well, this is all for the good of the industry, as well as being good for our businesses,” he said, referring to the united front.

Peter Tonagh, chief executive of News Corp’s half-owned cable TV company Foxtel, said the proposed changes “aren’t optimal for any of us”, but the industry had embraced compromise because of “what would previously have been unimaginable competition”.

Yet their last-minute push, as Turnbull tries to persuade non-government lawmakers to vote for his package of changes, is not guaranteed to succeed.

The industry and government agree on the package of changes – removing caps on how many assets a single traditional media firm can own, letting cable television bid for some sports rights and cutting broadcast license fees owed by stations to the government.

But they face significant opposition, including from a populist bloc in parliament that wants less funding for the national broadcaster, the Australian Broadcasting Corp.

TOO LITTLE, TOO LATE?

A spokesman for Pauline Hanson’s One Nation, which has four of the Senate’s 76 seats, told Reuters the group is “not convinced that the challenges facing media operators justify the abolishment of the two out of three rule”.

The government has also said it will not split up the package of reforms.

Still, the overhaul may come too late.

Newspaper publisher Fairfax Media is considering takeover offers from two private equity firms below A$1.25 per share, a quarter of its price a decade ago. Television station Ten Network Holdings has warned it may collapse by the end of the year if it does not secure a new bank loan.

“Those kinds of synergies (enabled by the changes) may be able to prolong your useful life, but is that really sustainable in the face of these little things called Google and YouTube and Facebook? I’m not sure,” said Brian Han, a Morningstar analyst.

Australian advertising spending is increasing more than 6 percent a year, twice as fast as the economy, and is forecast to reach $12 billion this year. Yet most of the growth is seen going into online advertising, while print, radio and television advertising is either flat or down.

Since 2015, Australian traditional media companies have written down the value of their assets by $4 billion in total, according to Thomson Reuters data.

A spokeswoman for Communications Minister Mitch Fifield said he still hoped to win over crossbenchers.